Happy first day of March to everyone! We hope you all are doing well! We also hope that you will join us this Sunday for the second race in our mountain bike series! We will be at King County's Soaring Eagle Park in Sammamish. Join us for a morning of fun on the trails! Jenna will be there with Girl Scout Cookies available for purchase, so this is definitely an event you don't want to miss! If you need more info, check this page out.

And be sure to check back here after the race is over for a link to pictures of the event! Here are a few from our last race at Dash Point State Park. 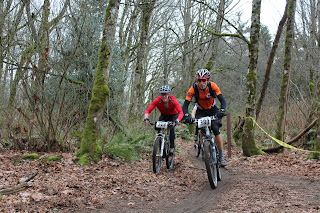 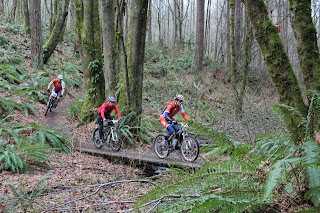 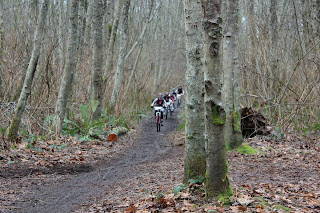 See you all on Sunday!
Posted by BuDu Racing, LLC at 10:09 PM No comments:

Calendars, calendars, calendars...the http://www.buduracing.com/ website now has our SingleTrack Cycles West Side MTB Series, Pacific Raceways Road Series and our Multisport events posted. Check it all out, and start planning. Excited for 2012!! So much to do...so little time!! Happy Holidays!
Posted by BuDu Racing, LLC at 10:57 AM No comments:

I won't do this for a lot of races...but I do want to bring up an upcoming race that sounds like it's a lot of fun and is a bit of a twist on the "usual".

Sarah Sandquist at the City of Redmond is trying to bring a few new events to the city and she has contacted BuDu for timing - wise choice, Sarah!  (Sarah also is an "import" into the Pac NW - at about the same time I did - from Chicagoland!)

In a few Saturdays - the 19th to be exact - there is a different type of race.  It's called the Poultry Predictor 4-Mile Race.  It's when you predict your time and try to run the race to match that time.  No watches are allowed on course, no mile markers and the time clock will be turned around at the start/finish.

Now, playing the devil's advocate, I'm sure there will be people who sneak their watch onto the course - either intentionally or not - and what about phones...are those not allowed?  However...if you go with the spirit of fun - it sounds like a unique twist and encourages anyone and everyone to get out their and move!  You don't have to be fast to win...you just have to know your speed!

Posted by BuDu Racing, LLC at 2:38 PM No comments:

The things I love about Western WA...

So last night, after a running event that didn't go as well as I hoped.  (I was a participant and it had no connection to BuDu!) I am going to take a different approach and try to enjoy the world I live in...

As some of you know (but the majority don't) I am an import to the area...I got off the boat last May (2010) and have been learning all about the Pac NW.  I spent the majority of my life in the midwest (Ohio, Illinois, Iowa, a brief foray in Nebraska, Indiana) and did venture a bit South into Kentucky and Tennessee (which some may consider the midwest, while some may not...).  However the weather and terrain was pretty similar in the midwest - terrain: flat; weather: cold in the winter, hot in the summer, with the possibility of having both climates in the same day.

...So...without further ado, my list of why living in Western WA is great...
Hope everyone is able to get a good run in today!  It's a beautiful one!
Posted by BuDu Racing, LLC at 1:52 PM No comments:

What could be better than a sale on triathlon stuff?!?!

Say what?!?  If you know me...and well...most of you don't...you know I love a sale! So when the lovely folks at WetsuitRental.com contacted Deanna to say, "How can we work together to (1) advertise our sale coming up and (2) encourage triathletes?" We replied, "Well...you could offer to sponsor an entry to a BuDu Racing LLC Multi-Sport Event for 2012!"  They said, "huh?"  We said "A tri...you could pay for someone's entry to a tri... **

So here is the deal:  Go to the sale THIS SUNDAY and mention that you heard about the sale from us - and they will enter you into a drawing to win an entry to one of the BuDu Racing Multi-Sport Events in 2012!  Seriously...it's that easy!

Here are the details about the sale:
“WetsuitRental.com is a locally based internet company than rents name brand triathlon wetsuits nationwide.  Our operations have been based out of Kingston, WA for 5 years now.  During the course of business, we've accumulated a large number of used wetsuits we would like to unload to make space for our 2012 inventory. We've also got a large number of triathlon products (FuelBelt, tri-mats, books and DVD's, goggles and caps, etc) that we'd like to clear out as well... We'll be hosting a sale at the former site of Kingston Lumber in our hometown Sunday, October 23 from 11:00-4:00. Look for the yellow building, 10901 HWY 104 across from the Bank of America. The site is a short (albeit all uphill) walk from the Kingston ferry dock. If you bring your receipt for ferry passage, we'll deduct $5 from your purchase. We'll have at least 200 wetsuits with all name brands and sizes represented. Expect some screaming deals because we want it all gone!”

** This conversation may be dramatized a bit...
Posted by BuDu Racing, LLC at 9:56 AM No comments:

So the BuDu Racing team is planning for 2012...and we're trying to find a good slogan for 2012.  In my effort to reduce the work that Deanna has to do :-D - I'm opening up the field to suggestions from our followers...so what you got??

I'll get the flow started...(and then you can see why I'm not "allowed" to be responsible for this task.)


Have you BuDu'ed today?
Tri-and-tri again...
Finish a triathlon and you'll win.

So leave your ideas here or on FB - we'll pick some of your ideas and then we'll let the public vote. We do have some time, but we'd like to have your submissions by the end of this month...(10/31). Thanks in advance for all of your thoughts and ideas!!
Posted by BuDu Racing, LLC at 2:06 PM No comments:

I've timed/worked at a few races where there are multiple events/distances that all start at the same time.  And it has happened more than once that participants have gotten misdirected - completely off of course - or misdirected to the incorrect course.

One young lady was disappointed that she got told to go to the 10K, even though she was supposed to be running a 5K, she told me she should have known because she saw a sign that said 5K in the other direction, but she was listening to the course volunteers.  She realized she should have gone with her first instinct, but then she was ecstatic when I told her her time...her pace was lower than what she was aiming for on the 5K on the 10K!  (My husband might say that indicates over training...)

One of the things that surprised me, as I was looking over USA Triathlon rules, is that the participant is responsible for knowing the course.  I have mixed feelings about this.  On one hand I say "yeah!"  it's not the Race Director's responsibility...and on the other hand I say...That might be quite difficult being a participant - how would you familiarize yourself with the course, so much so - that in the "heat" of the race - you are following the correct path.

Along the same lines...I don't know how many times I've been asked, "Is the course well marked??"  This question gets me every time...because I wonder - how in the world does this person think I know?!?!?  Does he/she think that prior to the event - at say 5 am - all of the course workers run the course??   Or maybe he/she thinks that I personally marked the course...and even if that were the case (which it isn't most likely) - what is their definition on "well"??  Do they need a reminder every 100 feet, yards, every mile, every 5?!!?  And what if it is marked every 100 feet, but it's a tiny orange sticker that most people won't be able to see??  Or maybe...just maybe...the person who marked the course used invisible paint...or what about bread crumbs?  Everyone knows bread crumbs are a good way to mark their path...(Ok, so that is just my cynicism speaking...)

ETA (Edited to add):   I am not trying to bad mouth participants or certain race directors...I know these things happen!   I just wish they didn't for both sides of the race!!
Posted by BuDu Racing, LLC at 1:32 PM 1 comment:

Email ThisBlogThis!Share to TwitterShare to FacebookShare to Pinterest
Labels: off course at a race
Older Posts Home
Subscribe to: Posts (Atom)